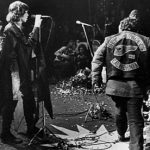 Huey Morgan tells the story of the Rolling Stones’ 1969 Let It Bleed tour, a milestone in rock history that defined an era, and its tragic finale at the Altamont Speedway.

The band’s previous tours had been brief, incandescent sets played to mostly screaming teenage girls. But as the 60s grew to a close, the Stones’ music had evolved. They played longer sets, which charted their influences by including tracks by their blues heroes, and as Bill Wyman said; “for the first time the audiences were actually listening to what we playing”.

1969 was the year of the free rock festival. The Stones’ Hyde Park concert in London in July was followed a month later by Woodstock and, as their Let It Bleed tour rolled triumphantly across America, the Rolling Stones decided to end the decade with a massive free concert to thank their US fans for their continuing support.

The concert, held at Altamont Speedway in the scrub lands of Northern California on 6th December, was meant to be the West Coast’s answer to Woodstock but the event turned out so differently, some believe it signalled the end of the peace and love era. It was badly organized, Hell’s Angels were providing security, and trouble started early on. Four people died including a young black man who was stabbed and kicked to death, at the front of the stage, as the Rolling Stones played Under My Thumb.

Shedding Hippie Blood provides a fascinating insight into what Rolling Stone magazine at the time called “the biggest rock tour music has seen”. It was a tour that defined an era with The Stones basically inventing stadium rock as their ground breaking journey unfolded. But it also represented the dark side that had emerged from a counterculture without control, conscience or conviction.